While there are of articles out there highlighting the impact individual women have made, there are fewer accounts detailing women teaming up to create powerful movements that effect real change. Let’s explore some of these amazing groups of underrated women in history and the powerful lessons they’ve taught us.

Women have been coming together in numbers for centuries to fight for change and influence the world in a positive way. Whether it’s through advocating for women’s rights, breaking barriers in business and entrepreneurship, or changing the way we think about aging and feminism, these groups of world-changing women have made a significant impact on society.

The Women’s March on Versailles

On October 5, 1789, a crowd of over 7,000 Parisians, led by market women, marched to the palace of Versailles, demanding bread and political change. Infuriated by rising bread costs, Louis XVI’s refusal to embrace change, and an overly extravagant royal dinner party, the women demanded to see the king and queen and to have their grievances heard.

Forcing Louis XVI to hear their demands, they were able to get the king to lower bread prices, accept crucial revolutionary changes, and hold a meeting of the Estates-General. This was a major victory for the women of Paris and for the French Revolution as a whole.

The Women’s March on Versailles became notorious for its role in the French Revolution. The women of Paris demonstrated their strength, and their activities aided in France’s revolutionary metamorphosis.

The Society for the Collegiate Instruction of Women

Though it may be hard to believe, women were not generally allowed to attend college until the late 1960s. This was due to the fact that they were not considered intellectually equal to men, and it was believed that they would not be able to handle the rigorous academic environment of the university.

But, a group of female scholars (popularly known as the “Harvard Annex”) decided to challenge this belief. The Society for the Collegiate Instruction of Women (SCIW) was incorporated in 1882 and until it became Radcliffe College in 1894, it only offered women certificates and not degrees. Regardless, their goal was to provide women with an education equal to that of men, and it helped pave the way for women’s colleges and universities for decades to come.

Thanks to their efforts, women’s colleges and universities began to proliferate in the United States, the Ivy League was no longer closed to women, and women were finally able to receive an education on par with men. The SCIW played a pivotal role in changing the landscape of higher education.

“We have to show that the wider scope of knowledge and the severer training of the intellect may strengthen and enrich a woman’s life,” she said, “and help her in her appointed or chosen work, whatever that may prove to be, as much as it helps a man in his career.”

President of SCIW, Elizabeth Cary Agassiz, in her address to the graduating class of 1896

Today, the SCIW’s legacy continues through the work of organizations like the American Association for University Women (AAUW) and the ACE Women’s Network. These organizations are dedicated to advancing women’s education and helping women achieve equality in higher education.

World-Changing Women from 1900 to the present

Another important group of women in history is the women who fought for suffrage, or the right to vote. The women’s suffrage movement began in 1848, shortly after the Seneca Falls Convention. It was a political movement that fought for women’s right to vote, and it was led by a group of passionate and dedicated women known as the suffragettes. The suffragettes believed that all women deserved the same rights as men, including the right to vote. They campaigned tirelessly for women’s suffrage, and their efforts eventually paid off.

The first major victory for the suffragettes came in 1890 when Wyoming became the first state to grant women full voting rights. This was followed by Colorado, Utah, and Idaho in 1896. In 1920, women in the United States were finally granted the right to vote.

The women’s suffrage movement was a turning point in history, and it paved the way for women to have a greater role in politics and society. The suffragettes showed the world that women are capable of leading change, and their legacy continues to inspire other world-changing women today.

In 2003, women in Liberia went on a sex strike to get their husbands and leaders to take action against the ongoing civil war. The women’s strike was led by Leymah Gbowee, a social worker and women’s rights activist working to end the war.

The women of Liberia were desperate for peace. They had seen their homes destroyed, their families killed, and their children forced to fight in the war. Tired of being victims, they decided to take matters into their own hands. The Liberian women organized the strike, and many of them went without sex for months until their demands were met.

The sex strike was a powerful display of solidarity, and it brought about a ceasefire and an end to war. These women showed the world that they were not going to be silent any longer. They were strong, resilient, and determined to make a change.

The Ongoing Fight by World-Changing Women

According to the United Nations, 650 million women and girls around the world marry before they turn 18. Pregnancy during adolescence is not uncommon, especially among girls who marry in their early teens. Because of this, their education is disrupted, and they are unable to go to school or other activities. Child marriage restricts girls’ prospects and increases their risk of domestic abuse.

One group of women who are changing the world in India is working to put an end to child marriage: the 100 Women Peer ]Groups. Women’s Peer Groups in five rural Indian states are working to end child marriage in their regions. These leaders engage members in community meetings by asking them to promise that they will not have their daughters married before age 18—or attend such weddings. They then organize protests in their communities to raise awareness about the adverse effects of early marriage.

“If all people start boycotting such weddings, it would definitely help eliminate child marriage. People are needed during a marriage ceremony—a priest to perform the religious rites, musical band to play the music, cook to prepare the food for the guests, and guests to give their blessings to the newlyweds.”[1]

What Can We Learn From These World-Changing Women?

These inspirational women in history have shown us that it is possible to effect change on a global scale. They have also shown us that women are a force to be reckoned with. When women come together, they can literally change the course of history and our societies.

So what lessons can you personally learn and apply in your own life from their example?

“When women support each other, incredible things happen.”

Are you ready to step into your power and become a catalyst for change? If so, consider joining the Queen’s Quest Group Mentoring Program today! Through this program, you will receive guidance and support from Lady Grey, as she helps you claim your queendom and establish meaningful connections with other women.

Check Out Posts by Topic

Follow our Instagram for Inspiration on Living an Outrageous Life
Your Free Guide: Become a Powerful Catalyst for Change 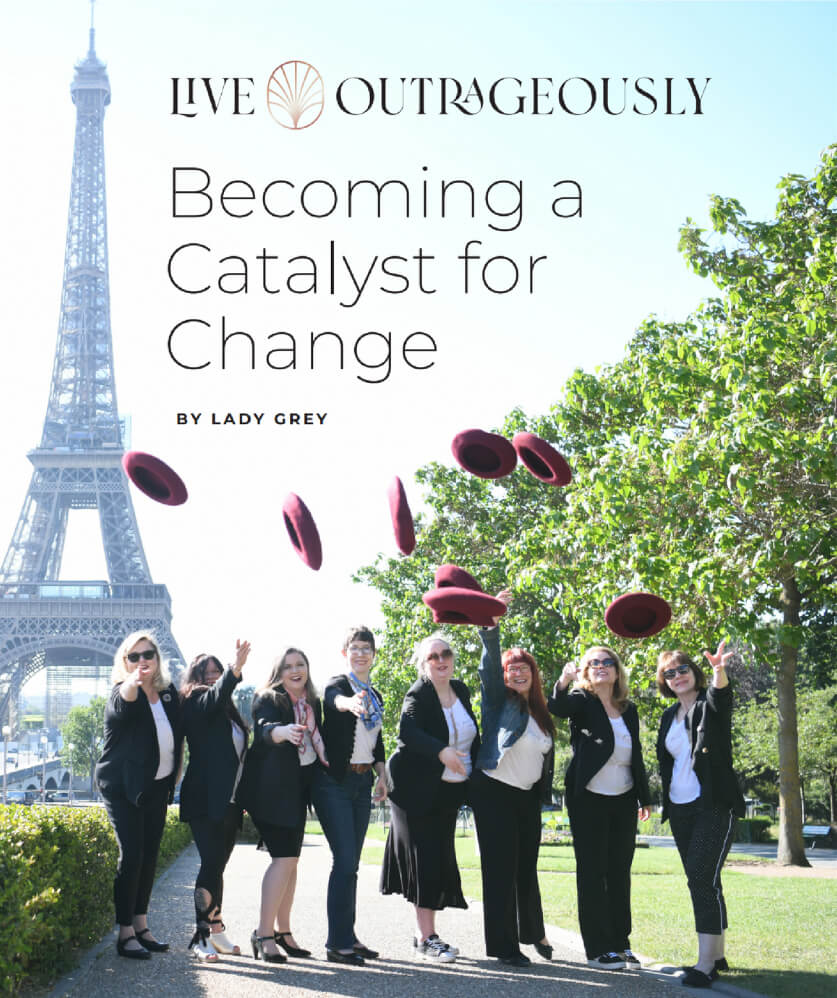 Learn practical steps to become a significant woman of action, starting now.
By entering your info, you’ll become part of our Outrageous community – with FREE access to inspiring tips and special invitations, delivered with love to your inbox. (Unsub anytime in a click.)